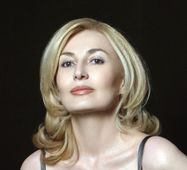 Stanka as a model

Stanka start to write poems when she was nine years old. She was born in Čakovec (north of Croatia), and now she lives and works in Zagreb. Gjurić is a member of the Croatian Writers’ Association,  Croatian community of independent artists, and Croatian Academy of Science and Art in Diaspora (St. Gallen, Switzerland).

Until today she published 20 books (poetry, philosophical and lyrical essays), poems on CD, and collection of video poetry on YouTube titled “Selected poems and new ones”. Her work have been published in all major literary periodicals and many anthologies. Her poems are translated in English, Arab, Italian, Turkish, Chinese and Spanish.
In 1988. her poems were printed in American Anthology of World Love poems: Love’s greatest Treasures: Today’s Poets Speak from the hear published by the American Poetry Association in Santa Cruz (CA)​. In January 2009 Stanka became a Croatian Friend-Advisor for World Peace Tour for Children.
As the author’s spectrum of interest is rather broad, besides modeling she has tried her skills as an actress and acted in seven feature films. Here is the link to her profile on IMDb In addition to many interests, beside her activity as professional writer, she has worked also as author TV host, and newspaper columnist in many dailies and weeklies.
After entering the world of film making (since 2006), Stanka gain worldwide acclaim. She had a special success with her short film Ubojite misli (Battle Thoughts). Her film was shown in France, Italy, Greece, Portugal, Spain, Bosnia and Hercegovina, Switzerland, Slovenia, Egypt, Canada, Srbia, USA, Republic of South Africa, Argentina, India, Russia, Austria, U.K., Bangladesh… Until today she shoot cca 20 films and won 13 International awards.
What’s most interesting about her filmmaking career is that she is a film director, producer, screenwriter, film editor, and cinematographer of her own films.
She started to write a public diary in her former website in early 1996, which (the web site) at the time was rarity in ex Yugoslavia, so we can say that with the public diary revelations Gjurić was the forerunner in publishing something that today we call blog.

We use cookies on our website to give you the most relevant experience by remembering your preferences and repeat visits. By clicking “Accept All”, you consent to the use of ALL the cookies. However, you may visit "Cookie Settings" to provide a controlled consent.
Cookie SettingsAccept All
Manage consent

This website uses cookies to improve your experience while you navigate through the website. Out of these, the cookies that are categorized as necessary are stored on your browser as they are essential for the working of basic functionalities of the website. We also use third-party cookies that help us analyze and understand how you use this website. These cookies will be stored in your browser only with your consent. You also have the option to opt-out of these cookies. But opting out of some of these cookies may affect your browsing experience.
Necessary Uvijek omogućeno
Necessary cookies are absolutely essential for the website to function properly. This category only includes cookies that ensures basic functionalities and security features of the website. These cookies do not store any personal information.
Non-necessary
Any cookies that may not be particularly necessary for the website to function and is used specifically to collect user personal data via analytics, ads, other embedded contents are termed as non-necessary cookies. It is mandatory to procure user consent prior to running these cookies on your website.
Spremi i prihvati
Skip to content